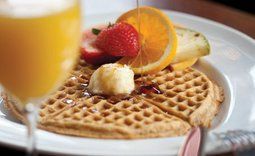 A plump, soft-yolked egg. Strips of hot bacon, crunchy and curled, with the taste of smoke and salt. Golden waffles, each dimple cradling a morsel of syrup. Fluffy, tender-crumbed biscuits, blanketed with creamy gravy. Is it any surprise that the mere promise of a good breakfast will rouse the most stubborn sleepyhead? We’ve done the legwork—finding the best morning meals around town—so all you have to do is decide whether you’ll have yours with an espresso or mimosa.

Best Grand Slam
Popularized by Denny’s restaurant, this all-American meal is a platter of eggs, bacon or sausage, and pancakes. Table 219 in Capitol Hill gives us the Seattle Slam ($9)—two eggs cooked to your specs, two pancakes and crisp bacon or savory chicken sausage. What makes this slam a home run? Fluffy, golden pancakes are served with real maple syrup, and you can trade them in for French toast for only an extra buck.

Best Crêpes
Anita’s Crêpes in “Frelard” (Ballard/Fremont) serves up both sweet and savory crêpes during its popular weekend brunch. Savory crêpes are made with the traditional Brittany blend of buckwheat and bread flours, while chef Anita Ross’ sweet crêpes are made with bread flour. If your tastes lean more toward savory, the ham and cheese crêpe ($9), served with a local free-range egg and wrapped in a tender, wafer-thin crêpe, is a revelation. Have a sweet tooth? You can’t go wrong with the sweet cheese crêpe ($10), filled with ricotta and the sugar-tart chew of candied orange peel and pistachios.

Best Gourmet Belgian Waffle
Waffles are not what you might expect on the menu at the Capitol Hill outpost of Monsoon. But Eric Banh, chef and co-owner of the renowned Vietnamese eatery—known for its Asian-inspired weekend brunch items—is rumored to have hired chef William Belickis (Mistral Kitchen) last year to consult on the Continental offerings. The result? Textbook-perfect waffles ($11) with a substantial golden crust that melts on the tongue, leaving behind a whisper of egg, butter and syrup with each bite. Raspberries (fruit changes seasonally) and crème fraîche give a bit of acidic bite to this sweet treat.

Best Northwest Spin on French Toast
There’s something magical about sliding into a brightly colored booth at Columbia City’s Geraldine’s Counter and knowing that in about 10 minutes, you’ll be digging into the best French toast ($8.50) in the city. Three thick slices come in an order, with a crisp, impossibly buttery crust and a yielding, custardy center. The fruit toppings change seasonally—strawberries, blueberries and honeyed peaches have all had their turn. Real maple syrup is there for the pouring. (Psst…a two-slice order of Geraldine’s French toast is also available, for petite appetites.)

Best Blintzes
Blintzes can be difficult to find in Seattle, but we tracked them down at Roxy’s Diner in Fremont. Sweetened spoons of creamy farmer’s cheese are folded into these golden blintzes ($7.25), served with sides of sour cream and strawberry sauce.


Best Gluten-free Breakfast
One of the tastiest items on West Seattle’s Spring Hill weekend brunch menu just happens to be gluten-free: a mound of sharp Beecher’s cheese grits (grits are made from corn) and sautéed arugula is framed by a succulent bone-in ham steak, perfumed by smoke from the wood grill ($10). Pierce the soft-poached yolk of the egg cradled on top of the grits for the most luxurious sauce imaginable.

Best Bagel and Lox
The Pike Place Bagel Bakery in the Market offers New York–style bagels with nova lox, accompanied by cream cheese, capers, onions, and tomatoes ($7). For a U-District option, I Love New York Deli makes its own New York–style boiled bagels. Choose from the variety of lox—flown in from New York—in the deli case. (Price dependent on type and amount of lox.)

Best Hangover Breakfast
Do your Friday evenings consist of drinking yourself into a stupor at Capitol Hill’s Smith? You’ll be glad to hear that you can head back there the next morning for a surefire hangover cure. The Full English Breakfast ($15), served only on weekends for brunch, is an artery-clogging plate with three fried eggs, ham, browned sausage, baked beans, fry bread and three slices of baked tomato to counteract the cholesterol. Bonus: It tastes just as good if you’re sober.

Best Granola
The muesli ($9.50) at Andaluca is an addictive blend of diced melon, apple, dried cranberries, nutty flakes of oatmeal, with a dollop of tart yogurt and honey. Not too sweet, and tasting of both juicy fresh fruit and tangy nuggets of cranberries makes this granola the best in town.

Best Corned Beef Hash
West Seattle’s Spring Hill serves the platonic version of this greasy-spoon favorite with corned beef made with Oregon’s Strawberry Mountain meat ($11). Each beefy bite of hash is moist and crisped, flecked with golden brown potatoes and onions. Anchored by two pieces of grilled Dahlia Bakery white bread, and crowned with two poached eggs, this is one of the most stellar brunch plates we’ve had in the last year.

Best Northwest spin on Hash
Tom’s Big Breakfast ($16) at Lola is among the most adventurous hashes we’ve tried. Pieces of tender diced octopus are fried on the grill, along with a mélange of summer squash, peppers, chickpeas and pork belly. All this is piled onto a swipe of warmed Greek yogurt, then adorned with a sunny-side-up egg. The best part? The larger, meatier pieces of the octopus remain pliant, while the tiny tendrils crisp up on the grill, providing tasty textural contrast.

Best Gourmet Dutch Baby
Sequestered away on the east slope of Lower Queen Anne is Tilikum Place Café, a charming Northwest-inspired eatery that serves a fantastic Dutch baby ($8). This buttery, puffed pancake arrives at the table in its own cast-iron skillet with soft strands of pulled duck and tangy-sweet sour cherries nestled in the rich, eggy batter. A dribble of maple syrup over top ties it all together.

Best Over-sized Dutch Baby
The Dutch baby ($10.38) at The Original Pancake House (locations in Kirkland and Ballard) is a do-it-yourself affair with slices of lemon for squeezing, and powdered sugar and whipped butter on the side, allowing the diners to tailor the tart-sweet richness to their preference. The sheer size of this Dutch baby–with puffed sides that almost curl into the pancake–may raise some eyebrows, but its delicious, light texture makes finishing it an enjoyable feat.

Best Breakfast Deals
On weekdays from 8:30 to 11a.m., Hi-Life in Ballard offers six $5 breakfast deals, such as the Barrio Breakfast burrito, with chorizo, black beans, eggs and cheese; or the Rough-Sawn, corned beef hash with two eggs. Nestled between Magnolia and Queen Anne, Chinook’s offers waterfront views and complimentary scones: Each warm scone is showered with pearl sugar, making them almost too pretty to eat. A side of marmalade butter is there for the slathering.

Best Breakfast Appetizer
Yes, we have appetizers in the morning, too. Shaken with cinnamon sugar in a crisp white lunch bag tableside, and served with seasonal jam and whipped vanilla mascarpone, the fresh doughnuts ($8) at Lola are six bite-size pieces of warm, airy goodness.

The Throwback Breakfast Diner
Randy’s, a frozen-in-time vintage diner, is outfitted with orange and pink vinyl seats, and lots of Boeing memorabilia celebrating its proximity to the Museum of Flight. The sassy, old-school waitresses pour bottomless cups of coffee, while you do your best to finish off that dinner-plate-size pancake ($1.99). Cool additions: a large map tacked on the wall, charting one person’s flight around the world, and colorful model airplanes that suspend from the ceiling.

Knock Out Breakfast Side Dishes

You could easily make a meal out of these tasty sides

Brunches Worth Waiting For

Our favorite choices for more-than-breakfast, but not quite lunch