Sexism in the Distillery Industry & Why Cherry Bounce is so Good 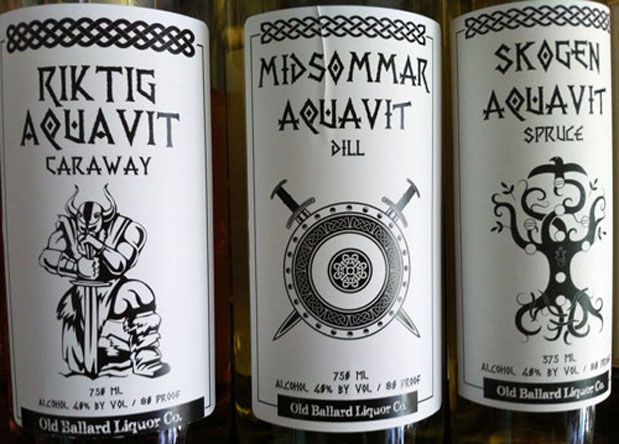 In our September 2014 issue, we profiled the Old Ballard Liquor Co., a wonderful distillery in southern-ish Ballard. Not only is it devoted to making delicious heritage and craft spirits and liqueurs, the owner, Lexi (who only goes by her first name), is super knowledgeable and friendly, so it’s always fun to stop by and taste and talk to her. Below is the full transcript of the interview, including her former gig as a ship cook and why OBLC’s Cherry Bounce is so good, to tide you over until you can stop by the distillery and talk to her in person.

What did you do before becoming a distiller?

I like to call myself “intellectually hyperactive.” My most recent job was working for BP Alaska in the oilfields of the Alaskan arctic, but I’ve also worked as a ship’s cook on fishing boats, caterer, software developer, Adult Basic Education teacher, and corporate business analyst.

Why did you decide to start distilling?

I wanted to go back into business for myself, but after running a software business that failed under the 2008 recession, it was very important to find something a little more recession-proof. I’d also been experimenting with homemade liqueurs for a long time and realized that there were huge gaps in the variety of products available to us in the U.S. so decided to jump in and try to fill some of those gaps with really good, unique products that weren’t available anywhere else.

What makes Cherry Bounce so good?

Sour Montmorency cherries are used to make it, which are really tart, red cherries used to make pies. Cherry Bounce came into existence as a way to enjoy that fruit all year long, instead of just in the summer when the cherries were fresh. Traditionally, Bounce can be made with any base liquor: whiskey, brandy, rum, etc. . . . but we wanted to really get to the nub of what makes it so good and decided to go with a neutral base that really showcases the beauty of that fresh, true cherry flavor.

Only freshly-picked whole cherries are used: pits, skins, and all. The cherries are in season for about two weeks each July and the entire year’s batch of Cherry Bounce is made in one very long day. On that day, the van leaves Seattle at about 2 a.m. for the 5-hour drive to the farm in Eastern Washington that provides our cherries. The cherries are picked and bucketed at about 6 a.m., and the van arrives at 7 a.m. At this point the cherries have been off the trees for about an hour and a full ton (about 2000 lbs) of cherries are loaded up. The cherries arrive back at the shop around noon. The rest of the day is spent packing and prepping them into the aging vessels.

The liqueur is then babysat for 6-12 months, with careful agitation and temperature control as it slowly ages.  All those tannins and acids and enzymes in the fruit go to work and the fruit breaks down very, very slowly, giving up not only the perfectly fresh flavor of real cherries, but also all of those nuances that you taste when you eat one out of hand.  After the Bounce is bottled, it continues to age in the bottle and will develop rich sherry/port flavors over time.

You have three aquavits, and I’m not sure everyone even knows what it is! Why did you decide to make this spirit, and what sets the two apart from each other and other aquavits?

After living in Sweden for a while when I was younger, I developed a taste for aquavit and wanted to make some more traditional aquavits that were true to the flavors and styles of what I’d had in Scandinavia.

There are hundreds of Scandinavian aquavits, but only one is currently exported to the US (Lysholm Linie)*.   There are different styles, flavor profiles, and uses that we, as Americans, never get exposed to.

Aquavit is closely related to gin in the sense that it’s essentially a spiced vodka. Gin is spiced with juniper, and Aquavit is spiced with caraway. Both developed around the Baltic Sea at the same time (around 500 years ago), and use many of the same spices and techniques. Most typically it’s a dry, savory liquor meant for sipping along with a meal.  Traditional Scandinavian aquavits are rarely sweet, but U.S. liquor stores always shelve it with liqueurs, which makes me crazy. It’s not a liqueur.

Old Ballard Liquor Co. has released an entire line of aquavits, each designed to stay true to the flavor profiles of Scandinavian aquavits, but also applying the New Nordic foraging and locavore principles of seasonality, simplicity and taste of place. None of ours contain fennel, anise or licorice, which sets them apart from the more familiar Northwest-style aquavits that tend to be sweeter and more licorice-forward.  All are designed to be sipped neat along with a meal and paired with specific foods.

For example: Riktig Aquavit is a rich, heavy, Norwegian-style aquavit meant for pairing with fatty, wintery Nordic foods like smoked lamb or sausage. Älskar Aquavit is a lighter, Southern-Swedish style lemon aquavit released for springtime. This one was designed specifically for oyster pairing. Midsommar Aquavit is a very strong Danish-style aquavit that’s meant to be served frozen with salmon or crayfish, which dulls the flavor a bit, so when you try it at room temp, it’s very very strong.

Your vodka range is really unique – how did you decide to go with such a wide assortment of things to distill?

As I was learning to distill, I had easier, cheaper access to local farm culls than to tons of grain. It’s also nice to offer a straightforward, inexpensive craft vodka. There’s so much vodka on the shelves right now that people have vodka fatigue.

I’ve heard Old Ballard Liquor Co. called a “nano-distillery” – what do you think about that moniker?

Love it.  I think I coined it…?  Maybe?  At 750 square feet (OF PURE AWESOME), five Old Ballard Liquor Co.’s would fit into some other microdistillers loading bays.  Sometimes we only release four or five cases of a product.

Are you planning any new products?

There are new products all the time, that’s why the shop has a chalkboard instead of fixed signage. Strawberry-Rhubarb Bounce is on right now, and another aquavit made with locally picked spruce tips from a tree right here in Ballard (editor’s note: This is now out!). Later a 120-proof aquavit called ‘Ragnarok’, will be released, and eventually a Ballard Linie: an Aquavit that crosses the Ballard Locks twice.

What else have you always wanted to tell people about distilling and being a distiller?

The beauty of being a small distiller is the ability to make unique products.  I don’t need to sell 10,000 cases of something unoffensive and bland to make ends meet, but when I ask a liquor store to shelve my two aquavits with its entire 35-square-feet section for gins, the typical answer is that there’s no room.  I’d love to see more distillers branch out and make unique products instead of more variations on the same familiar themes. The best part about my job is finding new (or sometimes old, forgotten) things to make and enjoy, getting to introduce consumers to experiences they haven’t had, or even just having someone’s grandfather come to the tasting room, ecstatic that he’s found something he’s missed for 50 years.

Distilling is an incredibly sexist industry. It’s rarely anything overt, like documentable comments, but more of a dismissive attitude, or the way that male distillers will interrupt or challenge women constantly without treating male peers the same way. There’s definitely a good ol’ boys’ club around.  It sucks, because there are some amazing products being made by women distillers in the U.S., and they deserve more respect than they get.

Seattleites are used to rotating seasonal foods, rotating seasonal beers, and even some wines.  Why not spirits too?  People will eat seasonally, enjoy the nuanced differences from batch to batch of locally crafted beers or single barrel whiskeys, but incongruously expect industrially perfect consistency in small scale spirits. We’ve got some amazing liqueurs coming out of Seattle craft distilleries right now.  Letterpress’ Limoncello, BroVo’s Rose Geranium, Sound Spirits’ Depth Cacao, and Sidetrack’s Bete (actually a brandy, but still amazing all by itself) are some of my favorites to have just by themselves.

*Note from Lexi: Many bartenders and professionals are unaware that Pernod-Ricard sold the Aalborg brands to Arcus in 2012, and Arcus immediately stopped all Aalborg exports. People often think that it’s just a temporary shortage. That’s not the case: Aalborg and Gammel Dansk have both been taken off the American market permanently/indefinitely.