By David B. Williams 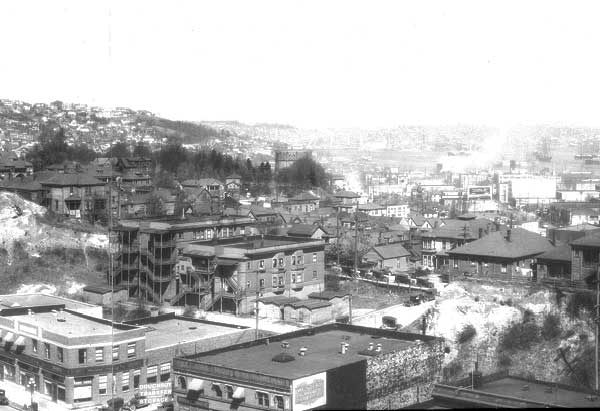 Within months of establishing their settlement in November 1851, Seattle’s founding families realized they had made a mistake. Their location on the western, forested shore of Elliott Bay could not support a good harbor, which would be central to the new community’s success. Trade vessels from the Pacific Ocean could travel down Puget Sound to its toe at Elliott Bay but without a deep-water dock the journey was a waste. So in the middle of winter, three men boarded a canoe with a heavy line and horseshoes in order to sound the depths of the rest of the bay. They soon found a location with deep water on the bay’s eastern edge and decided to move.

The new site was far from ideal. Steep hills and bluffs surrounded it; high tides periodically made an island out of part of it, and to the south lay the vast tideflats of the Duwamish River, half the day a barren expanse of mud and half the day covered by the waters of Elliott Bay. But the deep harbor was fixed in place and the settlers would have to adapt. With a former surveyor, Arthur Denny, as their leader, they knew the land around their chosen spot could be changed.

And change it they did. More so than most cities, Seattle is a product of metamorphosis, of people shaping the land to meet their needs. Initially, the focus centered on better access to Elliott Bay, the primary connection not only to the other little communities popping up around Puget Sound (which could be reached only by boat) but also to the wider world, principally San Francisco and, to lesser extent, Portland. Early Seattleites accomplished this by cutting down the seaside bluffs and regrading the steep slopes that prevented an easy connection to the waterfront.

The city’s business community quickly realized though that the sea was limiting and that rail access to the rest of the country was key to achieving the city’s financial destiny. But they had a problem here as well; there was no room for a railroad. The urban infrastructure had grown so fast that all of the flat terrain where trains could have come into the business center was taken with roads and buildings. The only possible route had to be around the city—which meant crossing water, either along Elliott Bay or across the Duwamish River tideflats.

Unfazed by this difficulty, Seattle’s founders formed the Seattle and Walla Walla Railroad to connect the city by rail to the east. Their chosen route was due south out of town across the tideflats. To traverse this expanse, they erected a two-mile-long trestle in 1876 by driving thousands of wood pilings into the mud. More trestles followed and eventually a spider’s web of rail lines rose above the water. But this was not enough to sustain growth.

By 1895, entrepreneurs realized that new land would need to be made by filling in the areas around the old train tracks, and that this land would be more valuable for commercial purposes than strictly for railroad trestles and tracks. Eventually more than 2,000 acres of the tideflats vanished under the assault. Using soil and rocks washed down from Beacon Hill and the Jackson Street regrade and mud from the excavations of the East and West Waterway, land-makers eventually filled in more than 2,000 acres of tideflats.

All of these changes were part of Seattle’s can-do, striving attitude. When the first settlers arrived on the shores of Elliott Bay, they named the place New York. What were they thinking? They were way out here, on the edge of the continent, not just days but weeks and months away from that bigger city with the same name. But for the pioneers a name like New York fit with their belief that their little community, and even this was a vast overstatement for the nanodot of habitation they had carved out of the wilderness, would survive and thrive.

Over time, massive land-moving projects became part of the city’s culture. It wasn’t that nature needed to be conquered, it needed to be controlled and used for our benefit. Need to make money? Sell the trees and extract the coal. Need to get from point A to point B and Denny Hill is in the way? Lop off its top. Need better access for business? Shave away unprofitable territory. Need flat territory for industry? Fill it in. Such progress became known as the “Seattle Spirit.”

Or, as local newspaperman Wilford Beaton summed things up in his history of Seattle, The City that Made Itself. “The hills raised themselves in the paths that commerce wished to take. And then man stepped in, completed the work which Nature left undone, smoothed the burrows and allowed commerce to pour unhampered in its natural channels.”

Why shouldn’t the early generations of Seattleites have held these beliefs? Every landscape change improved the city, making it easier to get to Seattle and easier to move through Seattle. There was more land for industry, more land for transcontinental trains. Landscape change had made Seattle undisputedly the premier city of the state.

Modern Seattleites may think of themselves as nature lovers, justifiably proud of our beautiful setting, but we haven’t left the Seattle Spirit so far behind. One of the justifications for building the Alaskan Way Viaduct Tunnel is to open up access to the waterfront. Who cares if the old, elevated viaduct still serves its purpose, we saw a chance to improve Seattle by digging a multi-billion dollar tunnel under the city and we took it. It’s a bit ironic though that none of the modern waterfront that we want to reach existed when the first settlers arrived in 1851.

Author of Stories in Stone: Travels through Urban Geology and Cairns: Messengers in Stone, David B. Williams is at work on a book about Seattle topography.