Sherry Cocktails are Having a Moment

Set your sails in the direction of this delicious, modern sherry cocktail 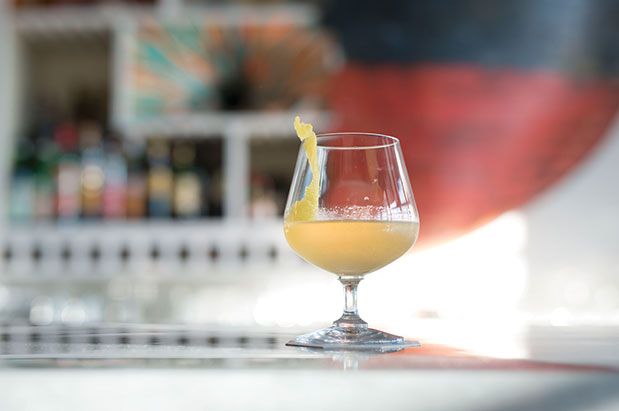 The Cocktail: The Tale of Two Cities
First popular in the latter part of the 18th and early 19th centuries, sherry cocktails are having a moment. These fortified-wine-based cocktails are becoming increasingly popular because of sherry’s rich and varied flavor spectrum—and also because sherry isn’t as potent as other cocktail bases (about 18–19 percent alcohol by volume). This delicious drink ($10)—which mingles both fino sherry (a bit drier) and oloroso sherry (oxidized in the bottle and usually darker and nuttier)—also boasts a trio of fruit-based players (pear brandy, lime cordial and orange bitters), with an end result that’s light on its feet while delivering rich, full aromas and flavors of nuttiness, citrus and spice.

The Bar: Open for about three years, Westward (Wallingford, 2501 N Northlake Way; 206.552.8215; westwardseattle.com) contains a waterside stylishness that has nautical touches, outdoor seating with a fire pit, fun dioramas (including a yeti scene) set into half of a dissected boat behind the bar and a fantastic view over the lake toward downtown Seattle. The space has a good history, too, as it once housed the jolly Lakeside restaurant in the late ’80s and early ’90s. Today, urban professionals flock here for the ambiance, chef Jack Rogers’ Northwest-meets-Mediterranean cuisine and bar manager Andy McClellan’s creative and approachable bar menu.

The Bartender: Since starting in the Seattle bar/restaurant biz as a Palace Kitchen busser in 2000, McClellan has poured at a fair number of spots—including the bar at Golden Beetle, which he launched, and the bar at the sadly short-lived Le Zinc. At Westward, the welcoming McClellan focuses on his real love: introducing people to great ingredients and drinks. This means tracking down local gems, such as Books & Bridges ginger ale, and delighting customers in unexpected ways. Among the surprises: creating batches of hot drinks for two in vintage thermoses, and offering a break-even bottle special of pours from a single bottle of super premium spirit sold at cost.

Pour the ingredients into a mixing glass. Add cracked ice and stir. Strain into a brandy snifter. Garnish with a lemon twist.