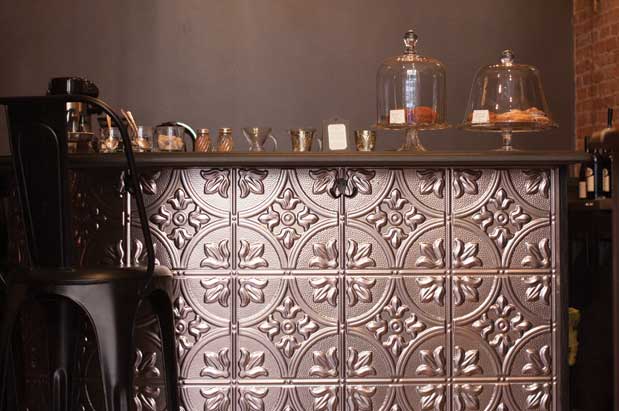 This article originally appeared in the February 2014 issue of Seattle Magazine.

!–paging_filter–pOn the first floor of the tall, brick Grand Central Building, just around the corner from Occidental Park, E. Smith Mercantile (208 First Ave. S; 206.641.7250; a href=”http://www.esmithmercantile.com” target=”_blank”esmithmercantile.com/a) is a family-run artisan shopping boutique and cozy bar combo—which I think is splendid, as shopping usually causes me to need a drink. Its well-curated cocktail menu and inventory match up perfectly with the recent Pioneer Square resurgence. brOpened by Kate Poole (a former wellness consultant) with daughters Jesse (a former clothing designer at Eddie Bauer) and Sara, and named after Kate’s grandfather, E. Smith is a singular spot. It has two “sections” and a design based on a bar in Atlanta, Idaho. As you enter the shop, you’ll find American-made jeans, all-natural apothecary products (hand-crafted by Kate), fine artisan foodstuffs and more intriguing fare—such as antler key chains and natural saddle soap. My favorite might be the Hardmill heavy-duty waxed canvas aprons ($235). brimg src=”/sites/default/files/newfiles/0214_esmith2.jpg” style=”float: left; margin: 10px;” width=”267″ height=”400″Farther back, the mercantile transforms into an exquisite little horseshoe-shaped bar. Much like the selection of goods up front, the cocktail menu and the spirit and liqueur selection have been chosen with care. This means that tasty, if slightly obscure, liqueurs, with names like Pierre Ferrand orange curaçao, sit on the granite shelves alongside locally made craft spirits, such as Seattle Distilling Company’s Rocket vodka.brThe cocktail menu, which changes seasonally or as the mood takes Jesse (who handles the majority of the bartending and cocktail creation), was put together with the same care, as it features creative, flavorful numbers such as the Miner’s Campfire: Scotch, tequila, grapefruit, honey and house-made smoked bitters with an alder-smoked salt rim ($10). I suggest you accompany that smoky and peppery delight with the warm and spiced chickpeas off the bar’s snack menu ($5). Larger plates also available, including house-made ricotta with local honey and rosemary toast ($10).brSitting there beneath a deer head mounted on a brick wall (which also houses an 1800s bunting and pickaxes) while your water is topped off via an antique metal water pitcher, it’s almost possible to believe you’re actually in an old mercantile in the center of a gold-mining camp. But my guess is that the folks serving you at that historical spot wouldn’t be nearly as friendly as the family that runs the lovely E. Smith./p