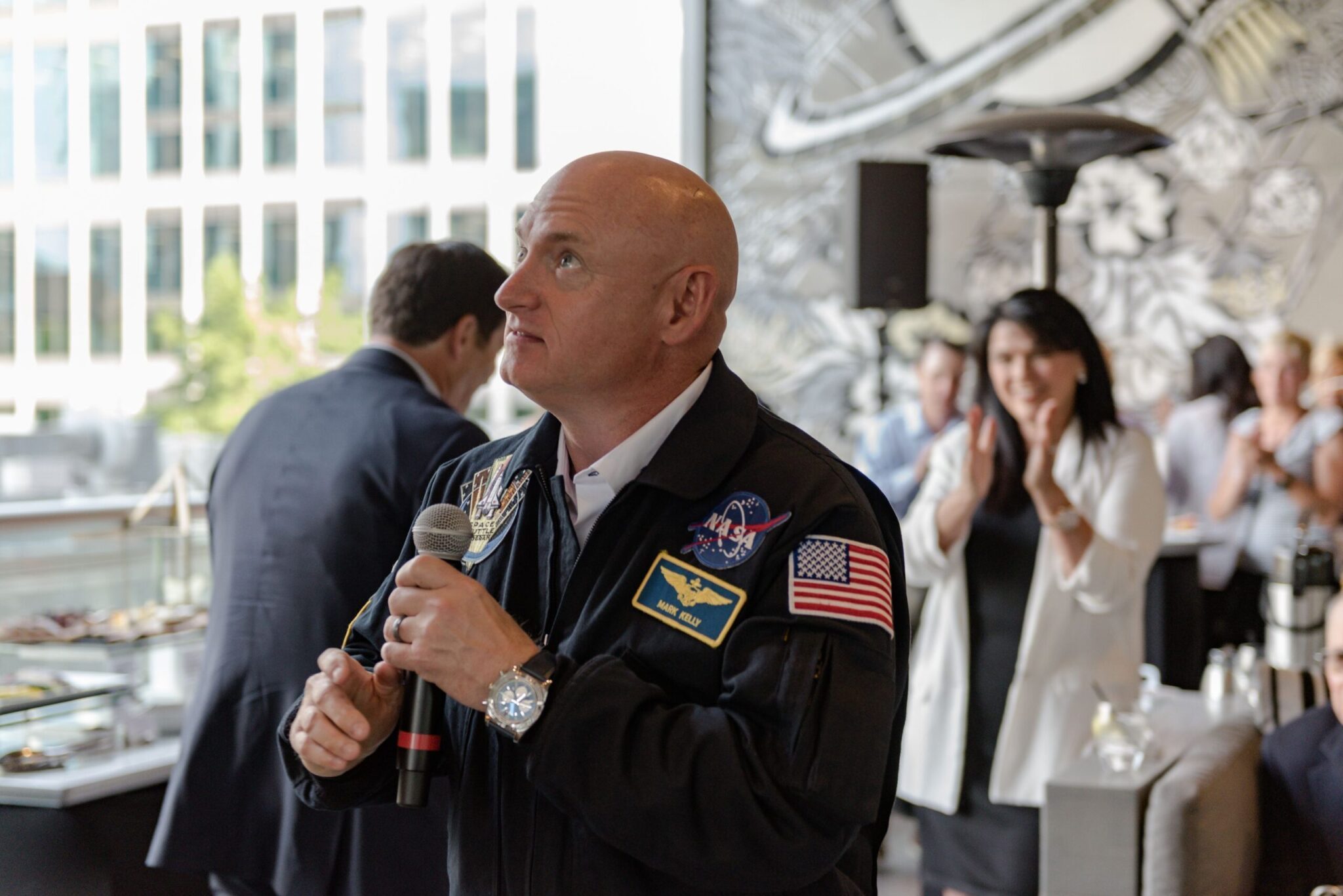 This is how many of us know Mark Kelly. The former NASA commander and U.S. Navy Caption’s dynamic career spans several decades and boasts various accolades including the Legion of Merit, two Distinguished Flying Crosses and the NASA Exceptional Service Metal. He is also one of only four individuals who have visited the International Space Station on four different occasions.

A title you might not be familiar with: Brand Ambassador to the Swiss luxury watch maker Breitling.

We recently caught up with Kelly at The W Bellevue to celebrate the unveiling of the new Navitimer 8 collection of watches. There we discussed his sartorial side, personal style, and the future of commercial flight. Is this your first time in the Pacific Northwest?

When I was in the Navy I spent time on Whidbey Island flying the A-6 Intruder. Currently, I live in Tuscan, Arizona, but I love coming to Seattle this time of year; the weather is perfect.

Have you always worn a watch?

I started wearing a watch in high school. My grandfather wore one of those metallic watches with the elastic metal band. And so did my dad.

But I’ve been wearing Breitling watches since my second space flight before I had anything to do with the company. The designs are made for military pilots and have a computer built in where you can calculate time, distance, and air speed, for example. For me, many of the other watches out there feel like jewelry, but with Breitling it’s a tool for your job. When I was at NASA, it (was) important to have a good watch when you’re flying a space shuttle and the piece that was supplied to me broke on my first space flight and kind of created an issue for me.

What watch are you wearing right now?

This is a Chronomat GMT, which I have in different faces and band colors.

I understand that Breitling has started to rebrand. Can you tell me about that?

I’ve been impressed with the new CEO [Georges Kern]. He wants to reduce the total number of available watches and I really like the new styles that he and his team are coming up with.

When did you become an ambassador for Breitling?

On my last space flight, someone from the Navy asked me if I would take a specific Breitling watch up with me. They were going to give it to a president but instead they decided to auction the watch off and give the money to charity. After that, I got to know the CEO at the time, which led to my partnership with the company.

What are your thoughts on the popularity of tech-based lifestyle watches, like AppleWatch?

I think it’s a good thing because it gets people who are young interested in wearing a watch again. So maybe when they are older they will decide to invest in a real watch.

Tell me about your personal style.

I like pieces that aren’t overly flashy and coordinate well. For example, I wouldn’t wear a gold watch with my not-gold wedding ring.

What are your thoughts on the new innovations in the space and travel industries?

You know, the DC-3 airplane was introduced in the 1930s and was one of the first airplanes that was able to transport people safely and efficiently. Before that commercial airliners killed too many people and cost too much. But because of that innovation you can now get from Abu Dhabi to Seattle within 14 hours.

All of that to say, I like where Jeff Bezos is taking Blue Origin. If I were to put the space shuttle on a launch pad in Seattle, I could get to London in about 40 minutes. He should be ready for private commercial flights in the next couple of years, but I don’t think that Jeff’s long-term goal is to take people up and down on a high-priced thrill ride. It’s probably has something to do with quickly transporting people around the planet.

Do you still fly?

I fly planes every now and then. But if Bezos offered to take his Blue Origin craft out for a spin, I’d probably consider it.

The Navitimer 8 collection of available at Alvin Goldfarb Jeweler in Bellevue.

Surprise with these unique offerings

The entrepreneur has a 'Knack' for gifting

The Power of Pop-ups