This Small Distillery Churns Out Heritage Spirits and Liqueurs That Amaze

The Old Ballard Liquor Co. is turning out an array of high-quality spirits and liqueurs 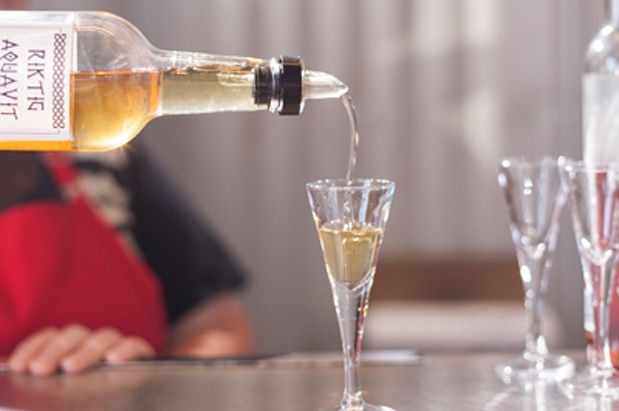 The recent boom in Washington distilleries has resulted in producers of all sizes, from large spirit and liqueur makers (hello, Woodinville Whiskey!) to mom-and-pop spots (see: the fine folks at Sidetrack) to one of the smallest in total space: the Old Ballard Liquor Co. (4421 Shilshole Ave. NW, 206.858.8010; oldballardliquorco.com). But don’t be fooled by the last one’s size (only 750 square feet total): This distillery’s dedication to delivering unique and tasty sippers—and reviving old and underappreciated spirits—rivals any other’s in the state.

Like many distilleries, the Old Ballard Liquor Co. (OBLC) started with a dream and a story. Owner Lexi (who only goes by her first name, like Prince) has a wild résumé: fishing boat cook, caterer, software company owner, teacher, business analyst. But after the recession, she wanted to start a more recession-proof career, one that tapped into her many skills and passions, which include science, food and now, distilling liqueurs.

In the summer of 2013, she opened the doors to what she describes as one of Washington’s first “nano-distilleries”; her space includes a tiny tasting room and all the distilling equipment. As Lexi says, you could fit five OBLCs in “some other microdistillers’ loading bays.”

But her ambition with her line of products is anything but small. Instead of starting with basic spirits—such as whiskey or gin—Lexi meticulously crafts items missing from local shelves. “The best part about my job,” she says, “is finding new (or sometimes old, forgotten) things to make and enjoy.” Her cherry bounce is a great example; she uses a recipe based on one of Martha Washington’s, made with tart Montmorency pie cherries from eastern Washington.

But I think her devotion to bringing real Scandinavian-style aquavit stateside is even more intense than her fresh obsession with bounces. While living for a time in Sweden, she acquired a fondness for the spirit—which is distilled from grain or potatoes and which mirrors gin, except that the core spice of aquavit is caraway, instead of gin’s juniper. When starting OBLC, she wanted to put out a line of aquavits, with “each designed to stay true to the flavor profiles of Scandinavian aquavits, but also applying the new Nordic foraging and locavore principles of seasonality, simplicity and taste of place.” She currently has three aquavits—caraway, lemon and dill—with more on the way.

While the distillery (and tasting room) is always bustling with friends helping and hanging out, and with fellow spirit and liqueur devotees, Lexi is always welcoming and ready to talk about her products and process (she’s also teaching aquavit classes at select Scandinavian spots, such as the Swedish Club). To really see how so much flavor is delivered in such a small space, a visit to the distillery is a must.

Cherry Bounce, $35.81
The “bounce” moniker not only alludes to this liqueur being based on a recipe of Martha Washington’s (at the time, “bounce” referred to a whole category of fruit liqueurs), but also on the agitating “bouncing” that is done by hand every day during the liqueur’s aging process. The end result really shows off the eastern Washington sour cherries it’s made with and is luscious without being cloying. There are also hints of almonds and maple. It’s wonderful with ice cream, by itself or as a substitute for Cherry Heering in the classic Blood & Sand cocktail (get the recipe).

Strawberry-Rhubarb Bounce, $35.81
Made using Skagit Valley and Sumner fruit, this liqueur is like a perfectly made strawberry-rhubarb pie with a kick. It isn’t overly sugary; instead, it carries a balancing bitter note on the tail end (much like any good rhubarb dessert). It’s marvelous sipped solo over ice. It’s also ideal as an accompaniment to pie, naturally, and it’s wonderful with chocolate and, interestingly, whiskey. Try it subbed for vermouth in a Manhattan and call it a Bouncy Boardwalk.

Älskar Aquavit, $35.09
A southern Sweden–style aquavit, this has no added sugar but does have a delightfully dry taste that features the spirit’s caraway center mingling with lemon, grains of paradise—a sort of cardamom-ish pepper spice—coriander and other herbs. It’s light on the tongue with a very clean finish. Like all aquavits, it’s designed to be served ice cold and paired with food, and goes exceptionally well with oysters and mussels, but also with asparagus topped with a little lemon.

Riktig Aquavit, $35.09
A Norwegian-style aquavit aged on local alder wood, this is more of a wintry spirit than the Älskar. It’s still worthy to sip year around, but is designed to be paired with heartier foods, such as smoked lamb and serious sausages. It goes perfectly with a Reuben sandwich, too, thanks to its caraway-forward flavor underlined by hints of mustard seed and other spices. (Don’t be confused into thinking all aquavits are long on anise, as this one has none.)

Midsommar Aquavit, $35.09
The distillery’s newest aquavit, Midsommar is a dill lover’s dream drink, boasting layers upon layers of dill, some floral, some more savory, accented by notes of caraway. It’s made to be paired with crayfish, shrimp, lobster and fancier fish, but also is fantastic alongside a cheddar and pickle sandwich when there’s just a little bit of sunlight left in the evening.