So Long, Stainless Steel. Concrete Barrels are the New Trend in Wine

There’s a new barrel in town. Oak and stainless steel make room for concrete in wineries This article originally appeared in the November 2013 issue of Seattle Magazine.

For about as long as wine has been made in Washington, there have been two predominent vessels for fermentation and aging: oak and stainless steel. But in recent years, influential wineries across the state have been experimenting with concrete. As concrete-raised wines—wines fermented and/or aged in concrete tanks—begin to hit the market, early experiments are yielding splendid results.

Concrete has a long history of use in European wineries. Christophe Baron, vigneron extraordinaire at Cayuse Vineyards, recalled seeing plenty of concrete in his parents’ domaine (Baron Albert in Champagne) during his childhood in France. It’s used regularly across France—the Rhône Valley, Burgundy and Bandol all are home to concrete acolytes—but until Baron imported concrete tanks from the famous Burgundian concrete producer Nomblot for the 2006 Cayuse vintage, there is no evidence of its use in the Walla Walla Valley or any other part of Washington wine country.

“You cannot have a great wine without a great mouthfeel,” Baron says in his energetic, French-inflected rasp, “and concrete is all about the mouthfeel.”

That advantage is noted time and again by winemakers in the concrete vanguard, who consistently see it occupying a sweet spot between oak and steel. “Concrete allows for the gradual oxygenation of the wine similar to oak barrels, but without the purchased flavors of oak barrels,” says James Mantone of Syncline Wine Cellars in the Columbia Gorge, another early adopter of Nomblot tanks. “This gives a truer taste of the vineyard without oak aromas or sweetness to cover up deficiencies in the fruit.”

Mike MacMorran of Mark Ryan Winery in Woodinville has begun using concrete eggs (egg-shaped concrete tanks) to ferment and age Viognier: “Concrete produces wines with a fresher, cleaner aromatic profile, similar to stainless steel,” MacMorran says, “but without the higher-toned, harsher palate sensations that we get from stainless.”

Much of the highest praise for concrete comes from producers of white wines: “The concrete cube gives us a slow, cool fermentation that is aided by the absorption of heat from the 4-inch-thick walls,” notes Chris Dowsett, who uses concrete for white wines at Buty Winery in Walla Walla. Concrete allows for “the ideal combination of verve and richness, two characteristics that often come only one at a time.”

Of course, no material is perfect. Disadvantages include concrete’s sheer mass (special forklifts are needed to move concrete tanks, which come in cube, cylinder and egg shapes), its fussy cleaning regimen (many techniques that work for other vessels—scrubbers, metal, very hot water, ozone, chlorine, strong acids—cause damage to concrete) and the potential for “pinking” a white wine by first using the concrete tank for red. The vessel cost is comparable to oak, but the shipping costs from Burgundy to Washington have been considerable. With several domestic concrete sources cropping up, those shipping costs should decline soon.

Concrete’s disadvantages are being dismissed as minor by a growing number of wineries buying new concrete tanks (in addition to the wineries mentioned already, others include K Vintners, Cor Cellars and Corliss Estates). Pepper Bridge Winery will be using concrete for the first time during the 2013 harvest, and Greg Harrington promises that its use is imminent for his Walla Walla–based Gramercy Cellars: “I have concrete envy,” he says. He’s not alone. 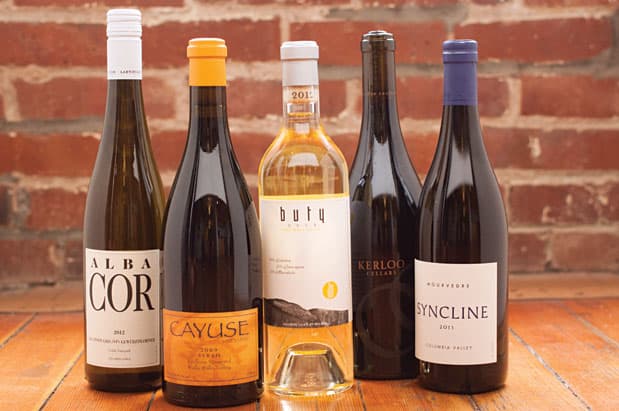 Cor Cellars 2012 Alba, Celilo Vineyard, Columbia Gorge ($19)
With all of its fruit from Celilo Vineyard, on the southern slopes of the extinct volcano Underwood Mountain in the Columbia Gorge, this white is a blend of 56 percent Pinot Gris and 44 percent Gewürztraminer, cofermented and then aged for five months in winemaker Luke Bradford’s concrete tank. The soaring, exotic lychee fruit aromas of the Gewurz are retained beautifully. The off-dry palate is a live wire of green apple, mineral and citrusy acids. Pairs with: A tongue-tingling chicken tikka masala.

Cayuse Vineyards 2009 Syrah, Cailloux Vineyard, Walla Walla Valley ($65)
As this wine is difficult to find if you’re not on the Cayuse list, your best bet is to seek it out on a restaurant wine list. If you do, prepare to be dazzled by the ultra-supple texture (thank you, concrete!) and the glorious pastiche of savory/umami aromas and flavors. Look for meaty, briny and sanguine notes that are perfect complements to the lush Syrah fruit and mineral. Pairs with:  A lamb tagine, studded with olives.

Buty 2012 Sémillon Sauvignon Muscadelle, Columbia Valley ($25)
This is a white that ages beautifully (or is it Buty-fully?), as a recent tasting of the 2008 vintage showed a wine still in ascendancy, picking up nuance and aromatic complexity. Drink it young, on the other hand, and you’ll find a lovely, vibrant mix of grass and clover, fig and honey, pear and peach. Its time in concrete allows the texture to pick up some weight without any overt oak influence. Instead, the stunning fruit and mineral are on full display. Pairs with: Seared ling cod with lemon beurre blanc.

Kerloo Cellars 2011 Syrah, Les Collines Vineyard, Walla Walla Valley ($70)
Les Collines Vineyard, in the foothills of the Blue Mountains east of Walla Walla, is a site known for delicate, savory aromatics in its Syrahs: a perfect match for concrete. Ryan Crane nails it, capturing the rich earth notes from this unique corner of the valley, an earthiness to lustily complement the violet-tinged blackberry fruit. Purity is the watchword here. Pairs with: Rabbit braised in red wine, bay leaves and a mess of Walla Walla sweet onions.

Syncline 2011 Mourvèdre, Columbia Valley ($30)
From Coyote Canyon, Ciel du Cheval and Heart of the Hill vineyards, this red offers a nose of brambly berry fruit, plums, leather and grapefruit peel. A great core of plummy fruit sits at the center of the palate, shaded by complexities of meat and leather spice. This has zest and flair, with a certain spiciness to its palate and personality. Pairs with: Queso frito con tomate.