South Asians are Becoming More Visible in the Philanthropic Community 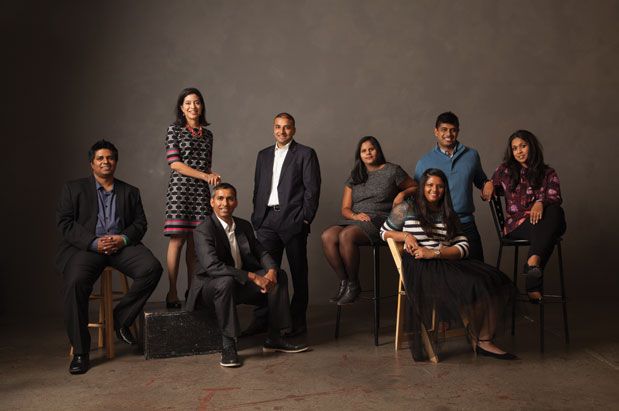 It’s a typical Seattle scene: Sunday brunch in the communal room of a downtown condo, decorated with a mid-century modern-patterned carpet and filled with recent South Asian transplants. But this is brunch with a purpose. And the dozen and a half attendees—bathed in soft gray light and munching on Top Pot doughnuts and blackened chickpeas—are here for a kind of Philanthropy 101 session.

It is intended as a crash course in how South Asians can get involved with the Pacific Northwest’s robust nonprofit scene, initiated by organizations—such as Upaya Social Ventures and Philanthropy Northwest—interested in recruiting this booming demographic and their pocketbooks.Indians and other South Asians are a fast-growing population in our region. Census data provided by City of Seattle demographer Diana Canzoneri shows that the Indian population in King, Pierce and Snohomish counties totaled more than 52,000 in 2010—close to triple what it was a decade earlier.Many of these new arrivals are 30-somethings connected to the technology industry.

They’re also eager to redistribute some of their wealth back to their countries of birth and beyond. In doing so, they’re continuing a local tradition of international philanthropy and development work by organizations that range from the Bill and Melinda Gates Foundation to a constellation of mom-and-pop nonprofits that are bringing Pacific Northwest ingenuity—and funds—to some of the world’s poorest communities.“We are definitely hitting a more diverse pool than before,” says Sachi Shenoy, one of the organizers of the philanthropic brunch.

Shenoy is the cofounder and executive director of Upaya Social Ventures, a Seattle-based nonprofit that invests in job-generating businesses in India. “It’s people that have come here maybe six months ago and want to figure out how to get involved.” But these aren’t just well-paid programmers looking to attend a gala and write a check. Some of these young idealists are starting and leading their own nonprofits and family foundations. Their efforts are changing the face of global giving in Seattle and bringing cultural context—not to mention entrepreneurial spirit and tech savvy—to a sector that has sometimes struggled with diversity. This trend has roots that reach back to an earlier technology boom, when South Lake Union was just a dingy corridor between Capitol Hill and downtown, and a growing city on the Eastside got all the attention.“Microsoft…comes in and you get this new infusion of talent, as the company grows,” says Akhtar Badshah, who ran Microsoft’s global giving programs from 2004 to 2014 and says many of the company’s international hires founded and funded nonprofits. Much of that earlier giving, doubled by Microsoft’s employee-donation matching program, was aimed at large national and international nonprofits that funded development projects in India.

“There is a propensity for the Indian community to give to orgs that are doing work in India,” says Badshah. The contributions helped establish a culture of global giving at the burgeoning tech giant, and came at a time when the region as a whole was re-envisioning itself as an international economic player. “The economic explosion and upward mobility of the tech sector and of Seattle has been paralleled in certain communities…. South Asians are an example,” says Amy Bhatt, an assistant professor at the University of Maryland, Baltimore County.

Bhatt, who earned her doctorate at the University of Washington, studies South Asian migration trends in the tech industry. “There’s a lot of wealth that has accumulated here.”As a result, that first generation of international tech workers helped incubate a number of nonprofits and foundations. For Srilata Remala’s father, Rao Remala, Microsoft’s first Indian hire, giving back was a way to stay connected to his home country.“He really struggled to get an education,” says Remala of her father, who wrote the original code for Microsoft Windows. “The village that he [grew up] in didn’t have a hospital…. He decided he wanted to give back so that children can have a better chance to succeed, like he did.”

That giving back took the form of a family foundation, now primarily run by Remala, 31, and her sister Srilakshmi Remala Kamdar, 36. Both women donate the family’s charitable funds locally and abroad. The foundation made a recent $500,000 donation to the United Way of King County for youth programming and a $15,000 donation to the Seattle-based Infectious Disease Research Institute to help combat chikungunya—a mosquito-borne disease that has infected members of Remala’s own family back in southern India. Reducing economic inequality in Bangladesh is the goal at the Spreeha Foundation, located in a squat office building turned sleek coworking space across from the Overlake mall in Redmond.“Our vision is life without poverty,” says 35-year-old Tazin Shadid, founder of the 4-year-old nonprofit. Shadid wanted to find real solutions for the poorest of the poor in his native Bangladesh, using the expertise he has developed in researching consumer behavior while working on Microsoft products such as Bing.

For example, Shadid wanted to understand why small children in Bangladesh’s slums don’t attend school, despite living a few miles from the schools. Shadid spent time in the community, asking questions and observing behavior. He concluded that working parents were unable to accompany their children on the long walk to existing schools, choosing to keep them in the care of neighbors or relatives instead.

In response, Spreeha began renting shacks in the slums to convert into local preschools. “I love learning about people,” Shadid says. Raised in Dhaka, the Bangladeshi capital, he moved to Texas, then to the Pacific Northwest for a job at Microsoft in 2006. “I have spent hundreds of hours in the slums, understanding the needs of these people.”

Shadid was able to spend those hours in Dhaka slums by taking advantage of a Microsoft program that compensates him $25 an hour for time spent on his organization (up to $15,000 per year—a limit he quickly maxes out). It has allowed him to develop a full-service approach to poverty alleviation—one that brings health care, education, job training and social workers to poor families in the neighborhoods where they live. But being an outsider, even in a global community like Microsoft, isn’t always easy. Shadid says his first years in Seattle were tough, as he struggled to make friends and break through the “Seattle Freeze.”

“I was from Texas and thought I was going to a really diverse city. Life was going to be so much fun. And I moved here and I was like, ‘What’s up with these people? They don’t want to talk to me!’” Now he finds that working in the nonprofit sector has helped him connect with other Seattleites. “It’s getting better,” he says.

According to Amy Bhatt, South Asians are becoming more visible in Seattle’s philanthropic community and as leaders in the nonprofit sector. “You’re seeing more markers of South Asian leaders in general…in American organizations and institutions,” says Bhatt, citing the local examples of Microsoft CEO Satya Nadella, Seattle City Councilmember Kshama Sawant and state Senator Pramila Jayapal. Earlier leaders led the way for this generation, she says. “As a result of a multitiered, multigenerational community, you have much richer examples of South Asian leaders in philanthropy.”

But Bhatt says there are still barriers for South Asians when it comes to getting involved in the nonprofit sector. Older generations, Bhatt says, often have concerns over mismanagement and corruption in philanthropy and nonprofits, born from bad experiences in their birth countries.

It’s a barrier Nadia Mahmud knows well. She and her husband, Adnan, founded Jolkona, a nonprofit that brings social entrepreneurs from Asian countries and around the world to Seattle for intensive technology and business trainings.

“In Bangladesh, there’s a lot of corruption, so you end up giving your money to family members, because everybody knows somebody who is poor or living in the village,” says Mahmud. “People don’t tend to give to organizations because people don’t really trust them.”

Trust was key for Shash Mody, 32, a recent Amazon arrival who—with climbing partner and fellow techie Vinay Patel, 39—summited Mount Rainier and Mount Whitney to raise money for Upaya and a California-based education nonprofit called Green Dot Public Schools. Mody grew up climbing in the Himalayas and saw climbing for donations as a kind of Indian-turned-Northwestern spin on charity walks and marathons.

Mody says he looked for organizations that were transparent and trustworthy, and focused on long-term solutions, instead of short-term charity. “I want to see measurable impact, and I make decisions with that in mind,” says Mody. “I think giving for the sake of giving can actually hurt economies and make populations dependent.” That’s why Upaya’s approach—which includes investing in entrepreneurs who will create jobs for India’s impoverished, instead of giving directly to the needy—appeals to him and other South Asian tech-industry donors.“All these folks in tech are acutely aware of venture capital…it’s the language of Silicon Valley and Seattle. They really want us to harness that in our model to ensure sustainability,” says Upaya cofounder Sachi Shenoy.

Shenoy explains that “patient angel investments” (which help entrepreneurs get on their feet), instead of loans (that would have to be paid back), better serve poor communities than a free market approach. “This demographic loves to think about investing in startups and the returns they could possibly get,” she says.

Despite some differences of opinion over approach, the impulse to help runs deep.“We want to do something good for local communities and communities across the world,” says Mody, who believes that witnessing extreme poverty drives many Indians in his generation to take action. “We grew up around a lot of poverty. Even if we weren’t in poverty ourselves, we could see poverty on our doorsteps everyday. We come to this country, and it’s hard to forget that there are people living on very little. I feel empathy for the poor; they don’t want a handout. Rather, they want access to jobs, education and respect in the same manner we do.”

Tazin Shadid, who clearly shares this sense of empathy, left his job at Microsoft this fall to work full-time for his nonprofit. “It’s scary in a way, [leaving Microsoft]; I had this high-paying, amazing job, the most fun job I could have had,” he says. “But this is too important and too big. The reward is totally different; you see all these people, and see their lives changing.”

Tapping into the best tech-related events