Where to Stay Near the Northwest’s National Parks

When planning a trip to one of our beloved national parks nearby, choosing a base camp off the beaten path can take your experience from enjoyable to extraordinary

This article originally appeared in the January 2020 issue of Seattle Magazine. 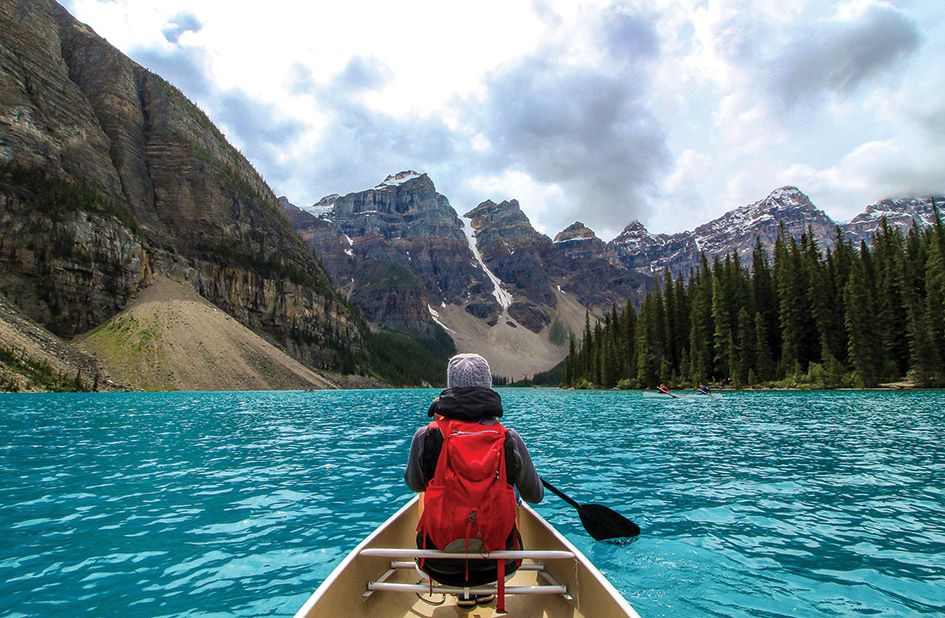 Banff National Park
Base camp: Golden, British Columbia
Founded as Canada’s first national park, Banff is known for Rocky Mountain vistas, turquoise lakes and aurora-streaked night skies. The park is open year-round, which means the popular park town of Banff is a bustling tourist hub for much of the year, with busy seasons in winter and summer. For those looking to avoid the crowds, Golden, B.C., is a laid-back mountain town offering quiet chalet accommodations and unique wildlife encounters less than an hour’s drive from Banff’s western gate—a scenic journey that climbs through the lesser known and comparably beautiful Yoho National Park. Look to Cedar House Chalets for well-appointed cabins, each with a private hot tub and several with striking mountain views, and the on-site Cedar House Restaurant (open seasonally) for fine fare and local wine. At the Northern Lights Wildlife Wolf Centre, visitors can howl with the resident wolf pack and even join its members for a hike through nearby Blaeberry Valley. The Grizzly Bear Interpretive Centre at Kicking Horse Mountain Resort is reportedly the largest refuge of its kind, allowing visitors a close-up view of resident bear Boo as he performs his natural grizzly routine.

Getting there: Golden, B.C., is a nine-hour drive or about a six-hour flight from Seattle (depending on the length of your inevitable layover).

Yellowstone National Park
Base camp: West Yellowstone, Montana, or Idaho Falls, Idaho
Yellowstone National Park is home to a nearly intact temperate ecosystem, known for its unparalleled geothermal activity, among other splendors. The tiny Montana town of West Yellowstone is just minutes from the park’s west entrance and about an hour from the Upper Geyser Basin, offering a quick commute to Old Faithful and its less predictable counterparts. The town’s 1872 Inn is an adults-only, rustic-chic boutique lodging option, with natural finishes and modern fixtures, and nearby Café Madriz (open seasonally) offers an unexpected alternative amid an abundance of burger options, thanks to paellas and tapas served by chef Elena de Diego, a native of Spain.

For a more bustling base camp with easy airport access, Idaho Falls, Idaho, is less than a two-hour drive from Yellowstone’s west entrance and about three hours from its south entrance—a longer journey that rewards with a scenic ride through Grand Teton National Park. Dependable chain lodging like Hilton and Marriott can be found here, but a stay at Destinations Inn will set you up for around-the-clock adventure: Its geographically themed rooms evoke images of distant locales, such as Hawaii, Egypt and Thailand.

Getting there: West Yellowstone, Montana, and Idaho Falls, Idaho, are both about a 12-hour drive or about a four-hour flight from Seattle (Yellowstone Airport is open from late May through September). Glacier National Park
Base camp: Whitefish, Montana
Given the rate at which the remaining glaciers at Glacier National Park are melting, there’s no time like the present to soak up northern Montana’s Rocky Mountain grandeur. Nearby Whitefish, Montana, is a quaint resort town less than an hour’s drive from the park’s western entrance, making it easy to enjoy luxe waterfront lodging and craft breweries during downtime. The Lodge at Whitefish Lake offers spa and sporting amenities, while the Great Northern Brewing Company serves beers inspired by local influences, such as the Going to the Sun IPA, named for the park’s famous scenic road. When you max out on panoramic sweetness, cleanse your palate with an afternoon about 20 minutes down the way in Kalispell: the Hockaday Museum is home to an art collection offering a glimpse of Glacier’s past, while Sweet Peaks (various locations) serves scoops of huckleberry ice cream for a taste of Montana’s signature fruit.

Mount St. Helens National Volcanic Monument
Base camp: Kalama
Mount St. Helens National Volcanic Monument has yet to earn official national park status, but it delivers all the features of such a park—hiking, natural wonders (lava tubes!), fishing—with the additional intrigue of a highly active volcano. This year marks the 40th anniversary of Mount St. Helen’s devastating 1980 eruption, with a special commemorative exhibit on display at the park’s visitor center from mid-May through October. Since this is a short drive from Seattle, plan for a multi-night stay to ensure an adequate variety of selfies with the volcano and ample time for hunting antique treasures. Tucked along the Washington/Oregon border, marked by the Columbia River, the town of Kalama, Washington, is just over an hour’s drive from the park and home to the new McMenamins Kalama Harbor Lodge, opened in 2018.

The riverside hotel takes design inspiration from Maui’s famed Pioneer Inn, with Hawaiian influence carried throughout its interior décor and on-site dining menus. Save plenty of space in the trunk for a visit to Kalama Vintage Warehouse, which hosts dozens of local antique vendors under one roof.

Getting there: Kalama, Washington, is a two-and-a-half-hour drive from Seattle. Crater Lake National Park
Base camp: Ashland, Oregon
Lodging near Crater Lake National Park is relatively limited, and while the breathtaking beauty of the volcanic crater turned body of water certainly deserves a singular focus, a sojourn to southern Oregon warrants a stay in artsy Ashland, Oregon. Drive just two hours south from Crater Lake through Oregon’s Rogue Valley and you’ll land in downtown Ashland, with its eclectic mix of restaurants, bars and other college-town amenities. At Lithia Springs Resort and Wine Garden, guest rooms feature personal soaking tubs and mineral showers, in keeping with the city’s historical reputation as a literal wellspring of lithium-infused spring water. Healing waters can also be found during a lengthy visit to Dobrá Tea, the only West Coast outpost of a bohemian tearoom collective founded in Prague, where you can kick off your shoes, cozy up on a floor pillow and leisurely leaf through a book-thick menu of international teas. It’s a perfect chance to elevate your chai standards or sip a chilled tea that looks like a beer.

Getting there: Ashland, Oregon, is a one-and-a-half-hour flight or an eight-hour drive from Seattle.

How to find many things of the sea

The backcountry ski season in Washington can last well into April