The Ultimate Pie Experience is Coming to West Seattle This Fall 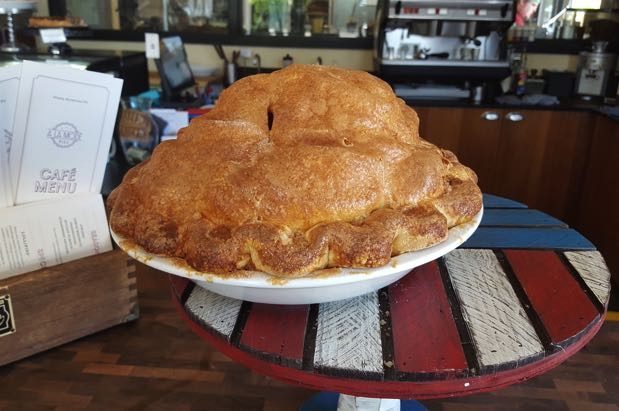 We have two words for you: Pie fry.

These sweet and savory dough bits are one of many innovative creations you’ll find when Phinney Ridge’s A La Mode Pies expands to West Seattle in September. The new shop will feature full dinner service with savory pies and tarts, boozy milkshakes, and Pies Cream, a signature line of ice creams featuring A La Mode’s most popular pies.

Owner Chris Porter opened the tiny original pie shop across the street from Woodland Park Zoo in 2012 and has had a steady stream of dedicated families and Thanksgiving home cooks stopping in ever since. But his second shop–its windows covered in ‘Pie Curious’ paper at the corner of Alaska St and California Ave–promises to be the Disneyland of pie shops.

Porter, a self-taught baker and Mountlake Terrace native, is hard at work to create a sense of place like no other in Seattle. In addition to the 10 or so A La Mode flavors you’ve come to love, from Bourbon Butterscotch to Blue Hawaiian (pineapple, blueberries and coconut), Porter is adding savory pies including Chicken Pot Pie, Brisket Pie, and his mother’s Mexican comfort pie, Hey Hey Ole, plus soups and salads. We are particularly excited about that Hey Hey Ole.

There’s more. The festive, 2,000 square foot space will feature theater-style baking and a new, high speed apple peeler; pie pedestals perched atop reclaimed barn wood from an apple orchard in Eastern Washington; and a wall clock that will chime at 3:14 p.m. each day, signaling the start of Pie Happy Hour (until 5 p.m.). Also look for: vintage pie safe used for garbage collection, new T-shirts with slogans like “Home Slice” and “Pie Curious” and extended evening hours, meaning you can get your pie on until midnight.

We can hardly contain our pie high.