On the Urban Farm 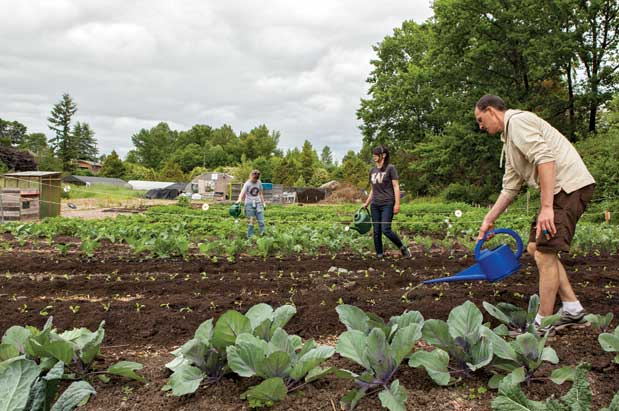 It is a cloudless day and spring has quilted the sprawling 8-acre Rainier Beach Urban Farm and Wetlands (RBUFW) in every shade of green, from the chartreuse tips of awakening shrubs to the hunter green of contorted, Seussian pines. Here in South Seattle, grasses, clover and dandelions hug the ground, sprinkled with drifts of tiny daisies. It is lively and a little wild in paradise: Red-winged blackbirds heckle from the wetlands’ reeds, and a bald eagle coasts high in the blue sky. Like castle walls, a vertical jumble of trees, evergreen and deciduous, enclose the farm-in-progress, blocking views of the outside world—or, at least, of nearby Lake Washington and the surrounding urban neighborhood near Rainier Beach High School.

Sadly, there is no time to string up a hammock. Becca Fong, director of the Food and Farms Program for nonprofit Seattle Tilth, with her hair pushed back in a black headband, is ready to show off the farm. “Want to go look in a greenhouse?” she asks. When the Atlantic City Nursery (owned by Seattle Parks and Recreation) closed several years back, neighbors rallied around the idea of using the land for a community-focused organic farm. Two years ago, nonprofit Seattle Tilth signed a five-year contract with Seattle Parks to join with neighbors and begin making the vision a reality. As she gives me a tour of the property, Fong shows how Tilth staff and neighborhood volunteers—collectively known as the Friends of RBUFW—are making this undeveloped city property, the size of about six football fields, into Seattle’s largest urban farm. (Pictured above: Ramadhan Mugasa (in hat) and his family meet with a representative (obscured) from an employment assistance group that partners with Tilth)

When complete, it will be far bigger and more diverse than any Seattle P-Patch—and more focused on feeding a whole community. The farm’s existing gardens, five greenhouses, office building and kitchen are currently undergoing an upgrade designed by Seattle landscape architecture firm Berger Partnership. In 2014, the farm will sprout classrooms, cold storage in reused shipping containers and a solar canopy with wash stations for dirt-caked hands. The designers are also hoping to bring in aquaponics (fish in tanks in a greenhouse) and perhaps a rice bog. “We’re pushing the envelope,” says Jason Henry, landscape architect and a principal at Berger Partnership. “There’s a wetlands, so why not a rice bog?” Raising fish, he says, would add another dimension. “It’s great to grow your own protein.”

The purpose of this ambitious plan is as simple as it is grand: “We want everybody to eat well every day,” says Seattle Tilth executive director Andrea Platt Dwyer. Organizers hope to achieve this goal through a collaborative model. Volunteers might plant beets or mulch raspberries, but they might not end up harvesting them—instead, perhaps they’ll take away today’s harvest of tomatoes and blueberries.

We enter the hot, chlorophyll-scented Greenhouse 5, where vigorous rows of seedlings will feed everyone from touring school groups, which make salads from the greens, to an Ethiopian and Eritrean elder group, which visits on Fridays and cooks some of the produce for lunch on the farm. Paid staff from Seattle Tilth lead tours of children from preschool to high school, and teach classes on organic farming, cooking and nutrition education. (Pictured above: Spare work boots are available for the 500-some volunteers that help on the farm annually)

It’s a short walk along a woodchip road, bordered by grassy, yet-to-be-farmed land, to a chicken hoop house, a coop domed at the top with chicken wire, like the top of a covered wagon. “Burners without Borders helped build this,” Fong says, smiling—referring to a group of Burning Man attendees who volunteered on this project. The young chickens chatter and peck at the straw. Fong gently scolds them. “I heard you guys got out,” she says. “You do not want to escape. Raccoons will eat you.”

A little farther on, in another hoop house, young ducks rest on the warm straw, soft brown feathers tucked close. The “Goose and Gander” duck house belongs to two women who lease field and greenhouse space, and who sell the eggs at farmers’ markets. “It’s a way of dabbling into our goals,” Fong says. She’s referring to Tilth’s efforts to act as a small-business incubator, providing support, including mentorship and education, for city people interested in making money from the local-food boom by growing plants, raising chickens and ducks, keeping bees or launching other small-scale farm activities that could fit on a city lot or even in a backyard. (In 2010, the City of Seattle changed city codes to allow residents to grow produce and other urban farm products at home and sell them on site or at other locations such as farmers’ markets.) “We want to show people it can be done,” says Katie Pencke, program manager for Tilth’s southeast Seattle programs.

The income-generating plans extend to the farm itself—Tilth hopes to derive 50 percent of the farm’s operating budget through income earned from farm products, field trips, fees for services, classes and workshops within five years. So far, it has subleased space for the duck pasture and a beekeeper, plus growing-space in a greenhouse to three different farm businesses. (Pictured right: Long-time RBUFW participants Juma Mkomwa (left) and Yergashowa Worku. In back, Ramadhan Mugasa.)

But the farm’s greatest success so far, a little more than a year into the project (still in its infancy, in farm terms), has been to put fresh food in the mouths of Rainier Valley residents. In 2012, farmers at RBUFW grew more than 4,000 pounds of organic fruits and vegetables, including strawberries, lettuce, kale, cucumbers, carrots, spinach, blueberries, sweet peppers and celery. That’s quite a salad. The site could potentially yield 20,000 pounds of produce a year, organizers say.

The recipients of this bounty represent a broad demographic, including teenagers volunteering from local schools and immigrants who work here once a week in exchange for a small stipend and bags of fruits and vegetables. In the process, both groups also learn basic job skills, such as filling out time sheets and navigating bus schedules, which can help them in the search for future jobs, Pencke says.

Another important group of visitors is children from 3 to 13, escorted by Jacqueline Boles, director of Health and Family Services at Tiny Tots, a group of five preschools in Rainier Valley serving 400 children, many from low- to moderate-income families. Boles, with a zingy laugh and cropped hair tinted the color of a plum, brings kids throughout the summer, so they can toss feed to chickens, graze on strawberries, plant carrots and turn compost. Sometimes, the elder groups teach farm skills to the children. Boles says getting enough fresh produce has been a problem for many children in Rainier Valley since her own childhood in the neighborhood. “Fresh fruits and vegetables in the house were a big deal.” Remarking on the high cost of eating healthily (as compared to buying processed food), Boles says, “We’re the richest country in the world. We should be able to figure out how to get healthy food in all areas.” The urban farm is helping to fill that gap by sending some of its harvest to local food banks, and distributing Good Food Bags of produce to volunteers and families who sign up ($5 a month). An added benefit: When parents pick kids up from Tiny Tots, Boles says, the children proudly identify new vegetables, such as kohlrabi and kale. (Pictured left: Tilth program director Katie Pencke)

Entering the onsite kitchen, I meet Hailu Weldeyes, a member of the Ethiopian elder group, who moves slowly and purposefully around the space, chopping Swiss chard, cracking eggs and stirring lentils in a simmering white crockpot on a nearby counter. Weldeyes looks solemn behind his downturned black mustache, but when I ask about the herbs he’s carrying, he playfully shakes the feather duster spray of mint beneath my nose. Weldeyes, 62, moved to the United States from Ethiopia in 2009, and lives with his wife, his college-age son and a cousin in an apartment in Greenwood. A former teacher, he, like the others in the Ethiopian and Eritrean elders group, receives a small stipend and free vegetables from the farm—some to cook for lunch and more to bring home—in exchange for farm work. Farming, he says, is something almost everyone does in Ethiopia. “But in my country, it’s not traditional for men to cook,” he says. Weldeyes’ wife has a full-time job, however, and he says his cooking and fresh vegetable deliveries from the farm make them both happy.

Lunch is ready. Ethiopian and Eritrean women dressed in firecracker-bright clothing, young adult volunteers in sweatshirts and visiting Tilth staff line up to fill their plates from a table heaped with salads, lentils, fresh Ethiopian injera bread and a vegetable stew. Making sure no one goes hungry may still be a dream, but everyone here will eat well today.