Local distillers are cooking up worthy releases of once illicit moonshine

This article originally appeared in the January 2015 issue of Seattle Magazine. 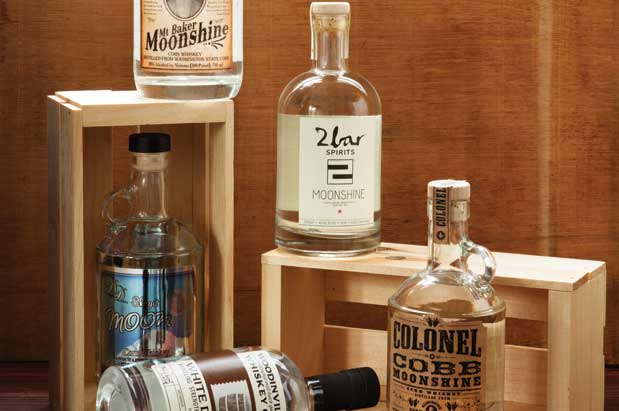 When I think of moonshine, I think of Mayberry sheriff Andy Griffith busting stills and dealing with genial drunk Otis, who picked up his high-octane spirits from backwoods moonshiners. This idea of the illegal still, hidden back in the hills with the law trying to hunt it down, is what many associate with moonshine. But today, in most liquor stores, you’ll find an array of bottles with the moonshine moniker on them. Much of it is being made right here in Washington, and it has come a long way from the rocket fuel ’shines of the past.

What is moonshine, actually? The term goes back to at least the 1700s, when smugglers on the coasts of England imported brandy and gin illegally in the dark of night with only the moon to light their way. Since then, many different illegally made or distributed (usually by not following regulations or paying taxes) spirits and liqueurs have carried the name. Here in the U.S., however, “moonshine” generally refers to un-aged corn whiskey—at 100 proof or higher.

While the legend of backwoods moonshiners stayed in the public eye in TV and movies, moonshine faded a bit from public consumption after Prohibition—why buy illegal and often harsh un-aged whiskey when tastier booze is available?
In the last few years, however, Washington distillers have been revisiting moonshine, with results that go against the long-held belief that consuming moonshine is like drinking gasoline with a dash of lightning.

As our distillery scene has expanded, producing moonshine has made perfect sense. For one, it’s a spirit that can be made well and sold without aging, unlike bourbon or rye whiskey. Secondly, our state is renowned for its grain, which is a key ingredient.

This allows locally focused moonshine distillers, such as SoDo-based 2bar Spirits’ Nathan Kaiser, to mill, mash, ferment and distill entirely onsite while using local grain. Perhaps the rise in all things American-heritage chic has a little something to do with it, too.

The result is potent, sure, like any straight spirit. But the top moonshines mingle strong grain character and notes with a sweetness that catches you off guard, perhaps, or an underlying pepper or spice that’s unexpected and welcome.

For some local distillers, homemade hooch reflects a bit of family history. Ask at 2bar Spirits and you’ll hear the “hints of moonshining in the family’s past,” says Kaiser. Mt. Baker Moonshine is based on owner Troy Smith’s bootlegging grandfather’s recipe. I tend to think there’s a little of the trailblazing outlaw in most of our distillers.

With modern moonshine, there are no regulations regarding the base grain, unlike other spirits, so you might see products called “moonshine” that are made from other things, as well as flavored varieties. But ask a devotee and that person will tell you that moonshine is whiskey in a pure state. And indeed, whiskey lovers will find a natural affinity for moonshine. But even those for whom whiskey isn’t their go-to drink should give our local versions a try.

“Each expression will bring out the subtleties of the moonshine,” says Paul McLeod from Anacortes-based Deception Distilling. The best have their own personalities and make their presence felt differently, depending on whether they are sipped straight or mixed in cocktails. Heck, I think even Sheriff Andy would have had a hard time turning down our local moonshine.

For A.J.’s recipes for cocktails made with moonshine go here.

TOP WASHINGTON MOONSHINES TO SIP:
While the term “moonshine” can be applied to a variety of spirited products, here we’re sticking to the historical definition: un-aged whiskey. We suggest first trying it neat—and at the distillery, if possible—and then mixing it into cocktails.

Skagit Moon $28
Deception Distilling
Made from a mix of 80 percent corn and 20 percent barley mash, this moonshine has multiple layers of grain that come out when tasted, along with a sweetness that doesn’t overwhelm or get in the way of the serious strength you’d expect from a 100-proof spirit. Distillery: Anacortes, 9946 Padilla Heights Road; deceptiondistilling.com

Woodinville White Dog Whiskey $30
Woodinville Whiskey Co.
While not called “moonshine,” this 110-proof un-aged whiskey, made from a traditional bourbon combo of corn, wheat and malted barley, still fits the category. It has an enjoyable and smooth mingling of grain and fruit, finishing with a little spice and caramel. Distillery: Woodinville, 14509 Woodinville-Redmond Road NE; woodinvillewhiskeyco.com