Oysters of another kind are on a spring forager’s mind 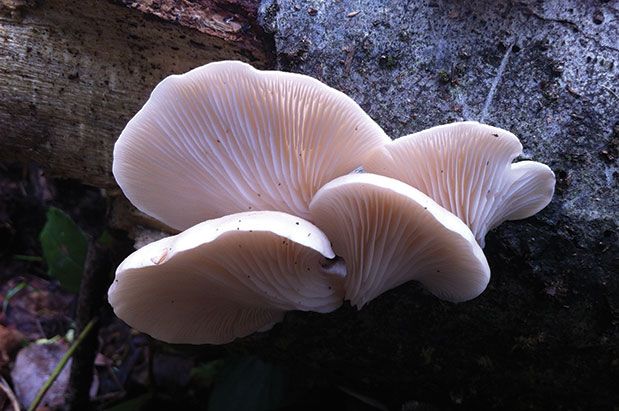 Springtime is knocking and mushroom hunters are champing at the bit to get into the woods. For Seattle fungi fanciers, this usually means a trip over a mountain pass to the sunny slope of the Cascades in search of morels and porcini.

But here on the wet side of the mountains, we have our own wild mushroom of spring, one that should receive equal billing with those prized dry-side species: the too-humble oyster mushroom.

I’ll say it again: Oysters deserve more attention. They are loaded with earthy flavor and easy to identify, and sometimes they fruit in staggering quantities. Finding them isn’t too difficult, either, once you know a little about how they tick.

As their name suggests, these fungi look like bivalves growing from the bark of fallen logs and old snags, with their cream color and clamshell shape. Unlike their namesakes, however, they have well-defined gills beneath the cap. In our region, they fruit anytime between February and November, though I most commonly see them in March, April and May. They inhabit moist, mixed woods in riparian areas—in bogs, along streams, on flood plains—wherever you might find stands of red alder. There’s a simple reason for this. Oysters feed on dead and dying alders west of the Cascades. (In eastern Washington, they also grow on cottonwoods.) Like fungi in general, they’re one of the great recyclers in our woods.

These days, you can also find oyster mushrooms in most supermarkets, because they’re widely cultivated, but don’t let this fool you. The wild variety is superior in flavor and obviously much more fun to shop for during a vernal hike in Seattle’s rural backyard. They are a favorite in Asian cuisine—I’ve used them to dress up bibimbap and tempura udon—and equally at home in Western preparations such as pasta sauces.

And if that’s not enough, consider this: Oyster mushrooms are now being asked to heal the planet. They’re at the center of experiments in mycoremediation—the process of using fungi to remedy environmental ills. Experiments have shown that the fungus can break down petroleum by-products—that is, eat oil spills—as well as filter out waterborne pollutants and bacteria such as E. coli. All the more reason to get outside and celebrate the return of spring with this virtuous—and tasty—member of the third kingdom.

» In a pot combine dashi broth (see recipe below), soy, mirin, sugar and salt. Bring to boil and lower heat.
» Cook udon noodles separately according to instructions, drain and rinse with cold water. I use frozen udon that comes in individual serving sizes, with several servings to a package.
» Sauté oyster mushrooms in a little oil (I use a mix of canola and sesame).
» Ladle udon and broth into bowls. Garnish with sautéed oyster mushrooms, green onion and optional toppings, such as fish cake. Season with a sprinkling of shichi-mi tōgarashi, if you like.

Dashi broth
Find dashi ingredients at your local Asian grocer. You can use dashi packets for convenience, but avoid the powders. Or, make your own broth following the instructions below.

» Soak kombu in water for a minimum of 15 minutes.
» After soaking, heat water until nearly boiling. Turn off heat and remove kombu. Stir in katsuobushi and steep for 10 minutes.
» Pour broth through a fine mesh strainer lined with cheesecloth or paper towel. Save kombu and katsuobushi to make a second dashi broth, known as niban dashi, which is especially useful for miso soup.