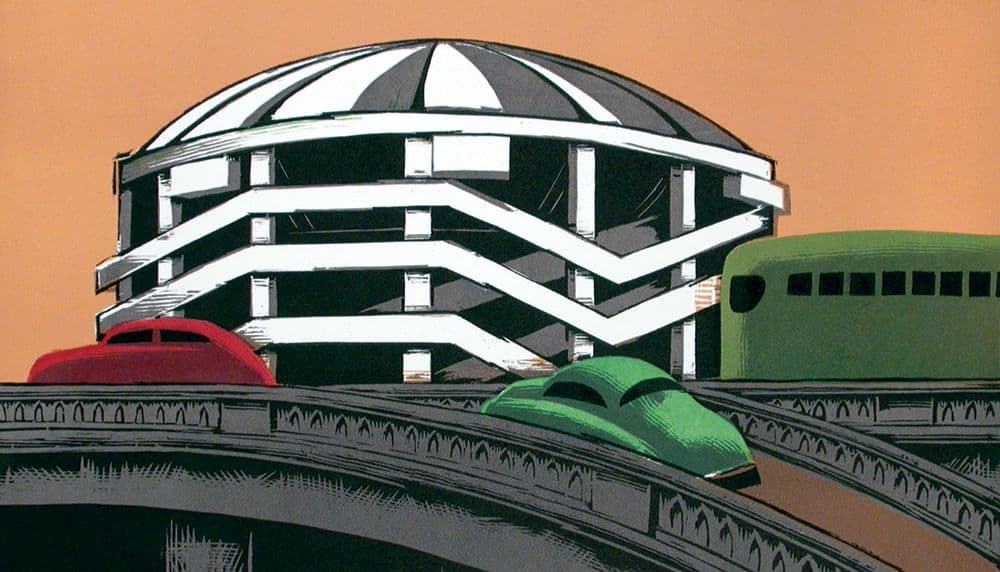 VISUAL ART
Lockwood Dennis
7/4–7/27
After you see his woodcuts, it makes perfect sense that Northwest artist Lockwood “Woody” Dennis (1937–2012) was born when he was. He seems to have absorbed the beautifully simple style of the Works Progress Administration posters in their heyday, when he was a tot: a bit abstracted and Art Deco–tinged, maybe reminiscent in their subject matter—mostly machinery and cityscapes—of socialist-realist industrialism, but nevertheless as thoroughly American as a Sousa march. Times vary. Free. Davidson Galleries, Pioneer Square, 313 Occidental Ave. S; 206.624.7684 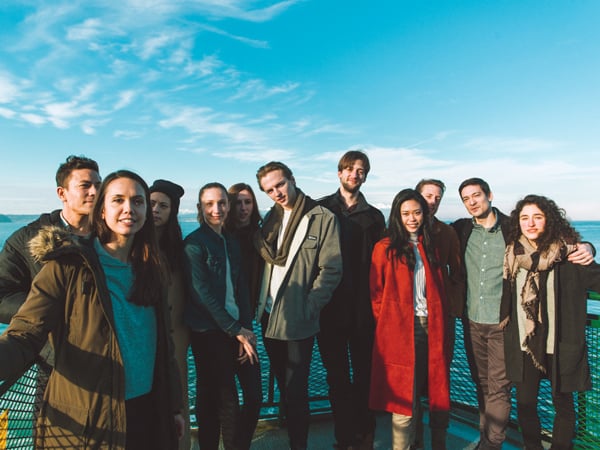 Members of the Seattle Dance Collective. Photo by Kenneth Edwards

DANCE
Seattle Dance Collective
7/12–7/14
Noelani Pantastico and James Yoichi Moore, the founders of this new troupe, are going to be busy, staying on as principal dancers with Pacific Northwest Ballet while enabling, as they put it, “other dancers and choreographers to fulfill some of their own unmet aspirations.” Their debut performances will be an out-of-town tryout on Vashon Island, with works by five choreographers on the bill and colleagues from PNB and Whim W’him (itself the product of a PNB alumnus, Olivier Wevers) joining them onstage. Times and prices vary. Vashon Island, Vashon Center for the Arts, 19600 Vashon Hwy. SW; 206.463.5131;

THEATER
The Year of Magical Thinking
7/19–8/11
Only a couple of years after writer Joan Didion finished her memoir of her husband John Gregory Dunne’s death in 2005, she adapted it into a one-woman play—incorporating further reflections on her daughter, who had died in the meantime. For ACT’s production, Suzanne Bouchard follows in the footsteps of no less than Vanessa Redgrave, who originated the role on Broadway. Times and prices vary. ACT – A Contemporary Theatre, downtown, 700 Union St.; 206.292.7676

FILM
Comedy Gold from the American Cinema
7/11–8/15
The six screwball comedies, dating from 1934 to 1943, in the Seattle Art Museum’s film series are children of the Depression and World War II eras: They gave the audience an escape from those grim times. Audiences flocked to these airy fantasies about romance, high society and martinis. Included in the lineup are the first two of the “Thin Man” series, in which William Powell and Myrna Loy play upper-crust crime solvers, and Mr. & Mrs. Smith, Hitchcock’s only American comedy. 7:30 p.m. $9 ($47–$52/series). Seattle Art Museum, downtown, 1300 First Ave.; 206.654.3210 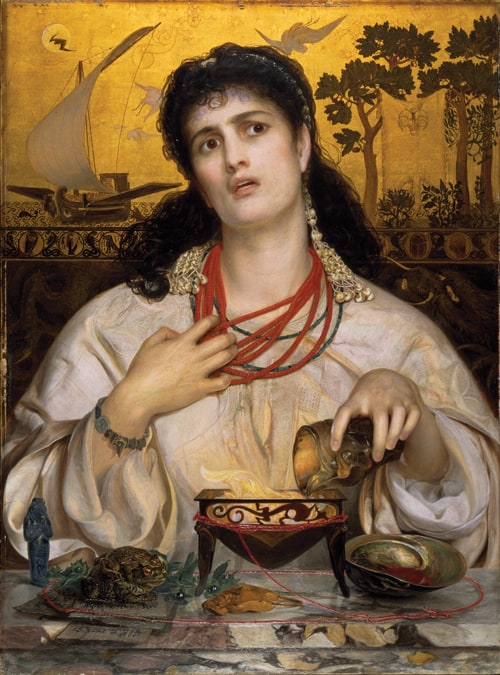 VISUAL ART
Victorian Radicals
Through 9/8
Almost as soon as Queen Victoria’s reign was over, her era became synonymous with prudish stuffiness, which is what makes the title of this Seattle Art Museum show such an eye-grabbing oxymoron. But there’s yet another irony underneath: The “radicals” in question revitalized stagnant British art by looking back to the delicacy and fancy of medieval art, in the process declaring their opposition to industrialization. Some 145 works, a number of them never yet seen outside Britain, will visit. Times and prices vary. Seattle Art Museum, downtown, 1300 First Ave.; 206 625.8900

MUSIC
Seattle Chamber Music Society Summer Festival
7/1–7/27
If you can’t run the whole marathon, how about just a few sprints? Here’s what I’d suggest if you have to choose selectively from the society’s lineup of concerts, performed each Monday, Wednesday and Friday this month: Dmitri Shostakovich’s bleakly beautiful Viola Sonata, his final work (7/10); Sebastian Currier’s Voyage Out, this summer’s world premiere (7/15); and Mozart’s Divertimento for String Trio, unfairly neglected but the equal of his great quartets and quintets (7/27). Times, prices and locations vary. 206.283.8710; seattlechambermusic.org

MUSICAL
Steve Martin and Edie Brickell’s Bright Star
7/10–8/17
After collaborating on a bluegrass album, the comedian and the musician decided to continue to work together on a musical—and here it is, in its Seattle premiere: the stories of two North Carolina couples, one set just before the Depression, the other just after WWII, and the secret that links them. Times and prices vary. Taproot Theatre Company, Greenwood, 204 N 85th St.; 206.781.9707

WORDS
Jeff Henigson
7/10
It begs to be a movie: When Jeff Henigson was a teenager battling cancer, he received a wish from a foundation and chose to travel to Russia to plead nuclear disarmament with Gorbachev. Warhead: The True Story of One Teen Who Almost Saved the World is his new memoir about the incredible incident, and he’ll be here to discuss its equally incredible aftermath. 7 p.m. Free. Elliott Bay Book Company, Capitol Hill, 1521 10th Ave.; 206.624.6600

FILM
The 48-Hour Film Project
7/23
Filmmaking teams that sign up for this challenge (at 48hourfilm.com) draw a genre at random, then have one weekend to produce what they can. It’s a challenge taken up all over the world, from Beirut to Brisbane to Bogotá; Seattle’s drawing is July 12–14, and the public screening of the results is on July 23. Times and prices vary. SIFF Cinema Uptown, Queen Anne, 511 Queen Anne Ave. N; 48hourfilm.com

WORDS
Shapes of Native Nonfiction
7/22
The basket—whose function determines its materials and shape—is the guiding metaphor in this just-released collection of essays by native writers. Drop in on this roundtable with editors Elissa Washuta and Theresa Warburton and contributors Ruby Murray and Laura Da’. 7 p.m. Free. Seattle Central Library, downtown, 1000 Fourth Ave.; 206.386.4636

THEATER
Shakespeare All Over
7/13-7/14
Wooden O and GreenStage are pulling off a neat trick this summer with their productions in area parks, making them at once accessibly casual and provocatively experimental. Wooden O, Seattle Shakespeare’s summer offshoot, is staging an all-female Romeo and Juliet and an all-male Twelfth Night (7/11–8/11; dates, times and venues available at seattleshakespeare.org), while GreenStage presents an all-female Taming of the Shrew, and a (presumably coed) Henry IV Part 2 (7/12–8/17, greenstage.org). GreenStage is also bringing back its “Backyard Bard” shows: this year presenting hourlong distillations of The Merry Wives of Windsor and Measure for Measure performed by just four very busy actors. Both companies will preview their offerings at Volunteer Park’s Seattle Outdoor Theater Festival: 17 performances by nine companies on three stages, all in two days (7/13–7/14, greenstage.org), all free. 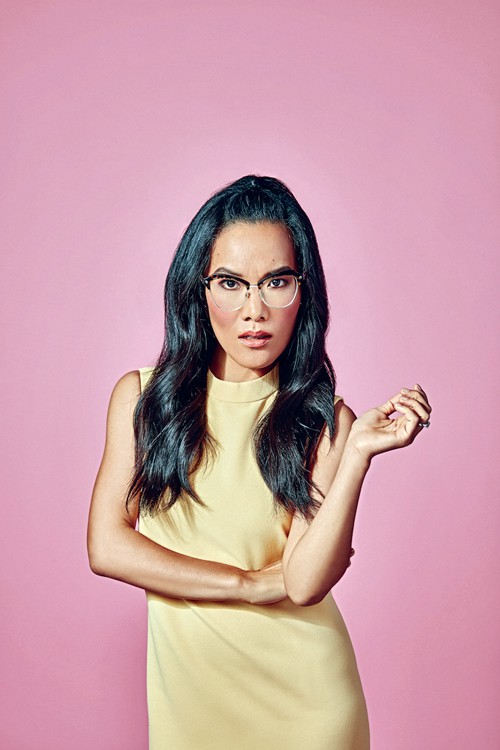 A guide to events happening throughout the city in February

From the Northwest African American Museum to the Museum of Pop Culture, Seattle residents have an abundance of opportunities to celebrate the achievements of African Americans in February during Black History Month. The annual celebration began in the United States in 1976. Countries around the world also celebrate the month. Here’s a guide to events…